Join Sheri Clarke, host, and discover both the popular sites and hidden gems of Paris as well as sites memorialized by famous Impressionist painters along France’s Seine River. Meander through the renowned gardens of Monet’s home and gardens in Giverny. Indulge in Norman chocolate, cheese and cider and enhance your best self on guided bike tours through charming cities like Vernon. Stroll the Normandy beaches with its famous war sites. With fairytale castles, cathedrals and idyllic scenery at every turn, this all-encompassing cruise is sure to inspire beautiful memories and dreams for years to come!.

Impressions of the Seine

Staterooms Starting from $4,049 per person, double occupancy*
Enjoy $500 Off Per Stateroom*

This is a Distinctive Voyage cruise†. At no extra cost, your cruise will include:

~ A complimentary amenity, to be announced 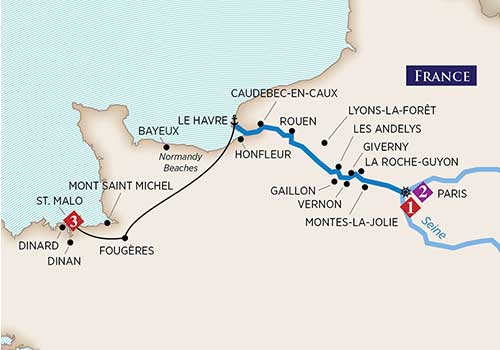 Board the AmaDante for your river cruise on the seine to Paris.

There are several different choices of excursions, both during the morning and afternoon, depending on your interests. You can choose between an excursion to the seaside town of Honfleur, renowned for its picturesque harbor, and for being an inspirational site for Impressionist painters. You can also choose a full-day excursion to see the historic Normandy Beaches, where you may visit such sites as the cemetery at Colleville-sur-Mer, Omaha Beach, the artillery battery at Longues-sur-Mer and the village of Arromanches, where the remains of the floating harbor used during the WWII landings can be seen. In the afternoon, you have the choice of a city tour of the UNESCO-designated Le Havre or a bike tour through Le Havre.

Visit Bayeux, with a medieval city center and the world-renowned Bayeux Tapestry, which depicts the 1066 Norman invasion of England, followed by a visit to Caen, where one of the top sites is the Château de Caen, an 11th-century castle built by William the Conqueror. Or instead, admire the 30-acre Harcourt Arboretum, with its nearly 3,000 trees, as well as the palatial Château du Champ de Bataille and the commune of Le Bec-Hellouin, known for its 11th-century abbey. Later, enjoy a scenic cruise from Le Havre to Caudebec-en-Caux, where you can visit Museo Seine, a museum focusing on the history of the Seine River.

Spend the morning enjoying medieval Rouen with a choice of several excursions. Join a walking tour past the imposing Notre Dame Cathedral, painted numerous times by Monet, and see the square where Joan of Arc was martyred, as well as the Medieval Quarter and Great Clock. You also have the choice to explore Lyons-la-Forêt, built on the site of a former fortress and featuring remarkable centuries-old architecture, as well as the idyllic castle Vascoeuil with its octagonal tower, art exhibitions and sculpture park. Or go on the “Tastes of Normandy” tour, where you’ll be treated to the delicious flavors of the region, including chocolate, macaron, Norman cheese and cider. Later in the day, bike through Rouen or experience another local château, the Château d’Etelan – the first Italian Renaissance Château built in France in 1494, where you may see a wonderful chapel with original wall paintings and the guard house dating back to 1350 in an amazing landscape life.

Take in the scenery on a scenic cruise before disembarking the ship to experience the colorful splendor of Claude Monet’s magnificent gardens at his former home in Giverny, admiring the water lilies, Japanese bridges and graceful willow trees immortalized in his paintings. For a more active adventure, pedal through Vernon on a guided bike tour. Or journey to Château de Gaillon, a picturesque Renaissance-style castle, as well as the beautiful Gardens d’Acquigny, boasting waterfalls, bridges, canals and a wide variety of trees and plant life. Later in the day, cruise to La Roche-Guyon where you’ll be treated to free time to explore the city on your own.

Experience the world through your taste buds and join a tasting tour during which you’ll get a chance to try the region’s famous apple-based calvados, cider and cheese. Or pedal to the French commune of Mantes-La-Jolie, founded in the early Middle Ages. If you prefer to sit back and relax, stay aboard the ship and watch the scenery go by as you sail to Mantes-La-Jolie instead. During the afternoon, go on a city tour during which you may see some of Mantes-La-Jolie’s beautiful religious structures, like the Gothic Notre Dame de Mantes, followed by a unique visit to a local bee farm. Alternatively, enhance your best self with a hike tour and venture further to take in more of its history and charm. Or visit the distinctive Château d’Anet, an elegant Renaissance château built in the 16th century by King Henri II for his mistress, Diane de Poiters.

Enjoy some of Paris’s most famous sights during your panoramic tour. You will be guided through the charming Latin Quarter, home to the world-famous Sorbonne University, and through the stunning 400-year-old Luxembourg Gardens, created by King Henry IV’s widow, Marie de’ Medici. Afterward, travel through Paris and see such sights as the Champs-Élysées with its cinemas, sidewalk cafes and luxury specialty shops; the Arc de Triomphe; and the Eiffel Tower. Alternatively, cover more ground on a guided bike tour.

Disembark your ship in Paris and prepare for your return flight home.

Put on your French beret for this marvellous river cruise on the scenic Seine River. Relax in the comfort of travelling with your knowledgeable and personable host, Sheri Clarke. Bask in the relaxed atmosphere of an AmaWaterways river ship. And enjoy the additional perks of a Distinctive Voyage.

Inquiry on the 7-Night Impressions of the Seine

General Terms: *All rates are per person for cruise only, based on double occupancy in an entry level category stateroom unless stated otherwise. Port fees and taxes of $210 per person are not included in the fare. Offer is valid on this sailing only and applicable to new bookings only. Unless explicitly stated that single supplement is waived, solo travelers in a double occupancy stateroom must pay an additional single supplement amount before receiving any discounts. Ask about Solo Traveler promotions. Offer is not combinable with any other promotions/discounts, limited to availability, capacity controlled, and is subject to change or termination without notice. Land programs and round-trip airfare are not included in cruise price quoted. Pricing and itinerary subject to change. Other restrictions apply. Registration as a seller of travel does not constitute approval by the State of California. CST#2065452-20.

Please contact your travel professional at this agency for more details.

This agency reserves the right to correct any errors, omissions or inaccuracies in this publication at any time without notice.

Distinctive Voyages: †Sailing dates and amenities, including exclusive shore events, are current at time of publication and are subject to change without notice. Amenities apply to 1st and 2nd passenger only. Distinctive Voyages amenities may be substituted if a minimum number of guests are not confirmed on any given departure. Cruise line policies and procedures apply. Cancellations, refunds, and penalties are those imposed by the individual cruise line. Guests must be booked in a featured group departure to receive amenities. Amenities apply to 1st and 2nd passengers only. If group space has been recalled or canceled by the cruise line, amenities cannot be applied.

Please contact your travel professional at this agency for more details on Distinctive Voyages.